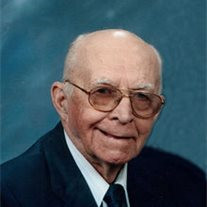 Arthur Harris Miller, age 92, of Cokato, formerly of Dassel, died Tuesday, April 22, 2014, at Abbott Northwestern in Minneapolis. A funeral service will be held at 11:00 a.m. on Friday, April 25, 2014, at the Gethsemane Lutheran Church in Dassel with Rev. Steven Olson officiating. The interment will be held at the Dassel Community Cemetery following the service. A visitation will be held one hour prior to the service on Friday at the Gethsemane Lutheran Church in Dassel. The Johnson Funeral Home in Dassel is in charge of the funeral arrangements. Arthur Harris Miller was born on January 3, 1922, in Cokato, Minnesota to Charles and Ellen Miller. Harris attended Dassel Public Schools. He served in the US Army from 1942 to 1943. On July 4, 1943, Harris was united in marriage to Marlyce Abrahamson in Washington. They lived in California for a short time. While there Harris worked in the shipyards. They moved back to Dassel where they bought a farm near Spring Lake and shortly after that bought the farm that they resided at until they entered Cokato Manor. Harris passed away on April 22, 2014, at Abbott Northwestern Hospital at the age of 92 years, 3 months, and 18 days. He was a lifelong farmer starting in the early years with horses. Besides farming he also worked in the seed corn business for C.J. Peterson and Payco Seeds. Harris enjoyed hunting, fishing, watching sports, and polka dancing. He was a lifelong member of the Gethsemane Lutheran Church in Dassel. Harris is survived by his sons, Darrel (Ruth) of Cokato, Steven (Pat) of Dassel, four grandsons, Branden (Anna) of Rochester, Jereme of Dassel, Craig (Jessica) of Hutchinson, and Bo (Stacy) of Hutchinson, six great grandchildren, Lee, Jae, Emily, Riley, Brinley, and Morgan. Harris was preceded in death by his wife, Marlyce and his parents.

Arthur Harris Miller, age 92, of Cokato, formerly of Dassel, died Tuesday, April 22, 2014, at Abbott Northwestern in Minneapolis. A funeral service will be held at 11:00 a.m. on Friday, April 25, 2014, at the Gethsemane Lutheran Church in Dassel... View Obituary & Service Information

The family of Arthur Harris Miller created this Life Tributes page to make it easy to share your memories.