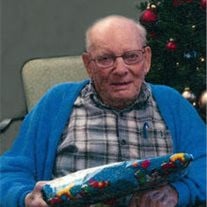 Arthur Herman August Alsleben, age 97, of Glencoe, formerly of Brownton, died Wednesday, April 16, 2014, at the Glencoe Regional Health Services LTC. A funeral service will be held on Tuesday, April 22, 2014, at 10:30 a.m. with Rev. R. Allan Reed officiating at the Immanuel Lutheran Church in Brownton. The interment will be held at the Immanuel Lutheran Church Cemetery in Brownton. A visitation will be held one hour prior to the service at the church on Tuesday. The Johnson Funeral Home in Dassel is in charge of the funeral arrangements. Arthur Herman August Alsleben was born May 21, 1916 to Otto and Paulina (Radtke) Alsleben in New Auburn Township, Sibley County, MN. He was baptized on June 1, 1916 at Immanuel Lutheran Church, New Auburn, by Rev. Geo. Diemer. He attended New Auburn School through sixth grade and then attended German school for two years. He was confirmed April 13, 1930 at Immanuel Lutheran Church, New Auburn, by Rev. Hans Werner. His confirmation verse was Psalm 91:1-2. He grew up on the family farm just south of New Auburn farming with his parents. On January 19, 1941, he was united in marriage to Eileen Diehn at Zion Evangelical Lutheran Church, New Auburn Township, Sibley County, by Rev. Wm. Striepe. They lived with his parents until September of 1941 when they moved to their farm south of Brownton in Penn Township where they raised four children, Jerome, Eldonna, LaVonne and Elaine. He was a member of Immanuel Lutheran Church in Brownton. After Eileen's death in 1971, he discontinued his dairy operation. He retired from farming in 1975, but was always a farmer at heart, keeping up with farm prices and the planting and harvesting seasons. He was a "John Deere" man, especially tractors. This was his home until March 10, 2012, when he became a resident of Glencoe Regional Health Services LTC. He enjoyed fishing and eating them, playing cards, especially Schafskopf and buck euchre, family gatherings and driving through the countryside looking at the crops. He had a soft spot for the farm cats, even allowing them in the house. Favorites on TV were "Price is Right", " Let's Make a Deal", "Wheel of Fortune", "Bandwagon" and wrestling. During his time at long-term care, he enjoyed watching TV, playing Bingo, monthly birthday parties, men's group, happy hour, Pastor Reed's Sunday services and visits and spending time with friends and family, especially his grandchildren and great grandchildren. Someone bringing him a treat of fish, herring, summer sausage, beer, candy, fresh strawberries or potato pancakes made his day. Arthur passed away on Wednesday evening, April 16, at Glencoe Regional Health Services LTC at the age of 97 years. Arthur is survived by two daughters: Eldonna Rettman and her husband , Ed of Hutchinson, Elaine Haus and her husband, Don of Glencoe, grandchildren: Kris Ebent and her husband Brian of Waconia, Kim Norbie and her husband, Keith of Chanhassen, Dawn Norlund and her husband, Garry of Fairfax, Tonya Christensen and her husband, Chad of Glencoe, great grandchildren, Adam and Alex Ebent, Jake and Reese Norbie, Ty, Beau and Kole Christensen, sister, Esther Frauendienst of Gaylord and nieces, nephews and friends. He was preceded in death by his parents, wife Eileen on June 16, 1971, a son in infancy, son Jerome Alsleben on November 17, 2004, daughter, LaVonne Boller on December 22, 1996, granddaughter, Debbie Boller on June 3, 1989, and son-in-law, Lyle Boller on June 30, 2008.

The family of Arthur Herman August Alsleben created this Life Tributes page to make it easy to share your memories.