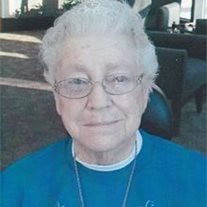 Arneldia "Nellie" C. Danielson, age 91, of Waconia, formerly of Eden Valley and Dassel, died Saturday, September 10, 2016, at the Good Samaritan Center in Waconia. A funeral service will be held on Saturday, September 17, 2016, at 11:00 a.m. at the St. Paul's Lutheran Church in Eden Valley with the Rev. Bryan Hopfensperger officiating. The interment of the urn will be held following the service at the All Saints Lutheran Cemetery in Darwin. A time to gather with the family will be held one hour prior to the service at the church on Saturday, September 17, 2016. Arneldia "Nellie" Cornelia Danielson the daughter of Bernard and Lorraine (Haag) Blomker was born on February 15, 1925, in Manannah Township, Meeker County, Minnesota. She was baptized and confirmed in the Christian faith and was a member of the St. Pau's Lutheran Church in Eden Valley. Nellie grew up in the Eden Valley area where she attended and graduated from the Eden Valley High School and later graduated from the Minnesota School of Business. Nellie was united in marriage to Dale Kenneth Danielson on June 22, 1946, at the St. Paul Lutheran Church parsonage in Eden Valley. Together, they made their home in Dassel, Hutchinson, Darwin, and in 1992, moved to Eden Valley. Nellie moved to Waconia following the death of her son Eugene in 2012. Nellie had been employed at Haapala Seeds as a secretary, was a seamstress for Fingerhut in Litchfield, a cook at the Dassel Cokato High School, worked summers at the Green Giant Canning Company in Cokato, and had owned and operated her own catering business. Nellie was an adventurous person who always enjoyed traveling, and during high school had taken flying lessons. She enjoyed spending time in her garden taking care of her flowers. Nellie was a past President of the Litchfield VFW Ladies Auxiliary. She loved holidays and the special times that she could get together with her family and friends. She always had a special place in her heart for her grandchildren and her great grandchildren. Nellie is survived by her children, Sharon (Michael) McAnnany of Palm Coast, Florida, Linda (Lonnie) Venske of Mayer, and Thomas Danielson and Bill Hauge of St. Louis Park; five grandchildren, Sean (Karen) McAnnany, Timothy McAnnany, Patrick (Sonya) McAnnany, Ryan Venske, and Kathryn (Don) MacDonald, and five great-grandchildren, Kaeli MacDonald, Alexander MacDonald, Sara McAnnany, Aidan McAnnany, and Aidan Wachhaus, siblings, Joan (Merlin) Thielen of Eden Valley, Wallace (Jean) Blomker, of Gilbert, Arizona, Allen Blomker of Fridley, and Myra Arnold of Eden Valley. She was preceded in death by her husband, Dale on November 13, 2007, her son, Eugene on January 6, 2012, and infant son, Kevin, her parents, and one brother, Conrad.

The family of Arneldie "Nellie" Cornelia Danielson created this Life Tributes page to make it easy to share your memories.