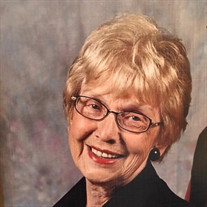 Arlette Elaine Anderson, age 83, of Minnetonka, formerly of Dassel, died Monday, November 12, 2018, at her residence in Minnetonka. A memorial service will be held on Saturday, November 17, 2018, at 1:00 p.m. at Peace Lutheran Church in Hutchinson with the Rev. John Pasche officiating. Interment of the urn will be held at Lake Arvilla Cemetery in rural Dassel. There will be a time to gather with the family one hour prior to the service at Peace Lutheran Church in Hutchinson on Saturday. Arlette Elaine (Eimer) Anderson, the daughter of Richard and Anna (Eschenbacher) Eimer, was born on August 14, 1935, in Aitkin, Minnesota. Arlette was baptized and confirmed in the Lutheran faith and was presently a member of Peace Lutheran Church in Hutchinson. Arlette grew up in the Aitkin area and graduated from Aitkin High School. She furthered her education by attending St. Cloud State. On August 25, 1956, Arlette was united in marriage to Melvin Anderson at St. John’s Lutheran Church in Aitkin. Together they made their home in Cokato for several years before they moved to Hutchinson. In 1966, Arlette and Melvin purchased a farm in Collinwood township where they made their home and raised their three daughters. Arlette was a dedicated mother who drove her daughters to Minneapolis for piano and dance lessons. Arlette had been employed by Hutchinson Technology, Inc. for numerous years before her retirement. In the fall of 2017, they moved to Minnetonka, where they have since resided. Arlette loved to spend time with her family and especially her grandchildren. She enjoyed the holidays, and Christmas was one of her favorite times of the year. Arlette had traveled several times to the Bahamas and to other destinations around the United States. After retiring they had enjoyed traveling internationally. They had traveled to Korea, China, and several other spots around the world. She could often be found in her garden, shopping, and going for walks in the countryside. She is survived by her husband, Melvin Anderson of Minnetonka, daughters, Sheryl Shark of Beverly Hills, California, Shelly (Terry) Nelson of Plymouth, and Jillaine (Jeff) Savage of Edina, five grandchildren, Elizabeth (Andrew) Richardson, Ashley Nelson, Brady Nelson, Zach Savage, and Alex Savage and a great grandchild, William Miller. She was preceded in death by her parents, Richard and Anna Eschenbacher, siblings, Alfred Gathman, Helen Nienow, Georgiana Wold, Richard Eimer, and Raymond Eimer.

Arlette Elaine Anderson, age 83, of Minnetonka, formerly of Dassel, died Monday, November 12, 2018, at her residence in Minnetonka. A memorial service will be held on Saturday, November 17, 2018, at 1:00 p.m. at Peace Lutheran Church in Hutchinson... View Obituary & Service Information

The family of Arlette Elaine Anderson created this Life Tributes page to make it easy to share your memories.