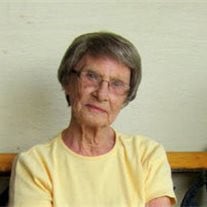 Arlene Sathre, age 83, of Dassel, died Saturday, April 30, 2016, at the Hutchinson Medical Center. A memorial service will be held at 1:00 p.m. on Thursday, May 5, 2016, at the Evangelical Covenant Church in Dassel with the Pastor Douglas Pierce officiating. The interment of the urn will be held at the Dassel Community Cemetery following the service. A time to gather with the family will be held one hour prior to the service on Thursday at the Evangelical Covenant Church in Dassel. The Johnson Funeral Home in Dassel is in charge of the memorial service. Arlene Sathre, the daughter of Albert and Lydia (Bendix) Eastling was born on February 24, 1933, in Cokato, Minnesota. She grew up in Dassel where she was baptized and later confirmed in the Christian faith. She helped her father at the Log Cabin Restaurant in Dassel and during the summer spent her time working as a corn detasseler. Arlene graduated from Dassel High School in 1951. After graduation she worked for the U.S. Dept. of Agriculture in Minneapolis. On September 22, 1952, Arlene was united in marriage to Gordon Sathre at the Evangelical Covenant Church in Dassel. Together they made their home in Dassel before moving to Braham, Minnesota where they co-managed a poultry farm for Minnesota Hatchery. This last September they celebrated their 63rd wedding anniversary. She enjoyed holidays and special events with her family and friends. She was a wonderful cook and spent many hours baking. She had lovingly crocheted numerous afghans and ornaments for her family and friends. She loved to attend craft shows where she would sell her handcrafted items. She is survived by her husband, Gordon Sathre of Dassel, children, Debra (Ronald) Hebeisen of Cambridge, Kevin Sathre of Chaska, Terri (Rob) Schmidt of Fair Oaks, California, eight grandchildren, Daniel (Rita) Hebeisen, Angela Hebeisen, Stephanie Sathre, Benjamin Sathre, Amanda Sathre, Jaclyn Schmidt, Jocelyn Schmidt, and Garrett Schmidt, two great grandchildren, Autumn Hebeisen and Sierra Hebeisen, close family friends, Darrin, Sandy and Ashley Krohn. She was preceded in death by her parents, Albert and Lydia Eastling, and her sister, Shirley Fremo.

Arlene Sathre, age 83, of Dassel, died Saturday, April 30, 2016, at the Hutchinson Medical Center. A memorial service will be held at 1:00 p.m. on Thursday, May 5, 2016, at the Evangelical Covenant Church in Dassel with the Pastor Douglas Pierce... View Obituary & Service Information

The family of Arlene Sathre created this Life Tributes page to make it easy to share your memories.

Send flowers to the Sathre family.