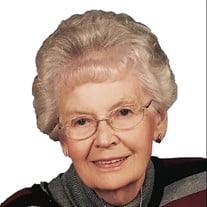 Arlene Marion Newstrom, age 96, of Dassel. Her family will gather for graveside services on August 17th where she will be laid to rest at Steelesville Cemetery next to Waldon, surrounded by beautiful prairie and high cornfields. If desired, memorials can be given to the Lakeside Nursing Home Activity Fund, Gethsemane Lutheran Church or Crow River Hospice. The Johnson Funeral Home in Dassel is in charge of the graveside service arrangements. Arlene Marion Newstrom, was born in Wildrose North Dakota on July 18, 1924, the youngest child of John Nelson and Alma Lundy Nelson. Not only was she the youngest child, she was the only girl in a family of six brothers whom she loved dearly. She grew up on the North Dakota Prairie, loving to ride horses and be a true tomboy. In 1938, her family moved to Belgrade Minnesota settling on a farm that remains in the family to today. She graduated from Belgrade high school in 1942. While working in the local pharmacy, she met Walden Newstrom, the only boy in a family of seven sisters. It was a perfect match. They settled in New London Minnesota where their 3 daughters Linda, Cindy and Lori were born. She was a member of Lebanon Lutheran Church where she taught Sunday school and participated in the Alter Guild and Ladies Aid. She was the town librarian when Wally accepted a new job and the family moved to Dassel, MN. As a member of Gethsemane Lutheran Church, Arlene was active in the Quilters as well as the Women's Fellowship where she made lifelong friends. Mom also believed in giving back to her community, serving as an election judge for many years. She also participated in the American Red Cross and Hospital Auxiliary. Her greatest joy was her family, especially as it grew to include grandchildren and great grandchildren. She loved to bake, cook and can a multitude of fruits and vegetables. She was always making hot dishes and sweets to share with anyone who needed some help. A favorite pastime was garage sales, finding many treasures over the year. Traveling was another love of Mom and she and Wally and the girls enjoyed many camping trips including multiple trips to California to visit family. They also visited Hawaii and after Wally's retirement they escaped the Minnesota winter spending several months in Lake Havasu for over twenty years where she and dad made many new friends over games of Whist and Hearts. And they never missed a graduation or wedding, no matter where in the US it occurred. Mom was preceded in death by her parents, brothers Solon, Norman, Bernadine, Odin, Arvid and Helge and her husband of 70 years, Waldon. She is survived by her daughters Linda Maguire (Jim), Cindy Newstrom (David Olson) and Lori Lundgren (Paul). Her grandchildren include Capt. Ryan Maves MD (Robin), Brenden Maves (Loriane), Kali Olson (Zach Akers), Kelsey Olson (Kyle Jarius), and James Maguire III (Kelsey). Astrid, Robert and Jonathan Maves of San Diego, Lily and Landon Maves of Denver, Jame and Gabriel Maguire of Maple Valley WA and Norman Jarius of New London, her great grandchildren, were her pride and joy. Mom is also survived by numerous nieces and nephews whose many visits over the years meant a lot her and dad.

Arlene Marion Newstrom, age 96, of Dassel. Her family will gather for graveside services on August 17th where she will be laid to rest at Steelesville Cemetery next to Waldon, surrounded by beautiful prairie and high cornfields. If desired,... View Obituary & Service Information

The family of Arlene Marion Newstrom created this Life Tributes page to make it easy to share your memories.

Arlene Marion Newstrom, age 96, of Dassel. Her family will gather...

Send flowers to the Newstrom family.