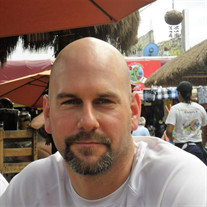 Anthony William Gasta, of Dassel, died in a single car accident and was called home at the young age of 46. A funeral service will be held at 11:00 a.m. on Tuesday, August 24, 2021, at the Evangelical Covenant Church in Dassel with Pastor Darrin Olson officiating. There will be a visitation on Monday evening from 4:00 p.m. to 8:00 p.m. and one hour prior to the service on Tuesday at the Evangelical Covenant Church in Dassel. In lieu of flowers, please consider giving a donation. Arrangements by Johnson Funeral Home in Dassel. Anthony William Gasta, the son of William and Barbara (Cheney) Gasta, was born March 23, 1975, in Moline, Illinois. The family moved back to Minnesota when Anthony was a year and a half and in 1979, the family moved to the Dassel-Cokato area where Anthony attended Dassel-Cokato School District and graduated in 1993. He then attended Dunwoody Institute in Minneapolis where he obtained his degree in electrical engineering. Anthony was baptized and confirmed in the Christian faith and was presently attending the Evangelical Covenant Church in Dassel. On August 23, 2003, Anthony was united in marriage to Jessica Johnson in Litchfield, Minnesota. Together they made their home in Cokato for a few years before moving to Dassel where they have since resided. He was employed by Lund Poured Walls in Howard Lake for twelve years and has been employed at Caterpillar Paving Products, Inc. in Brooklyn Park as a Product Control Inspector for the past ten years. Tony could often be found outdoors, hunting, fishing, socializing, and embracing life. He loved camping and spending time with his wife, kids, friends and family. He was creative, handy, and inventive. He was a jack of all trades and “Gastisizing” the heck out of everything! Tony never minced words and you always knew where you stood. His conversations always included stories and jokes with lots of laughter over a cup of coffee or maybe a Busch latte, depending upon the time of day. In honor of his memory, let us love unconditionally, bravely stand up for what you believe in, and embrace your time with those you love. He is survived by his loving wife and children, Jessica, Cailin (14), and Kenna (11) Gasta of Dassel. Mother, Barbara Gasta of Dassel and a brother, David Gasta of Delano. Parents-in-law, James and Pat Johnson of Litchfield, a sister-in-law Lisa (Dan) Cummins of St. Peter, brother-in-law’s, Michael (Cathy) Meyer of Glencoe, Todd (Erin) Meyer of Brainerd, and Joel (Dianna) Johnson of Grove City as well as numerous nieces, nephews, aunts, uncles, cousins, and close friends. He was preceded in death by his father, William Gasta, and a sister-in-law, Julie Gasta.

Anthony William Gasta, of Dassel, died in a single car accident and was called home at the young age of 46. A funeral service will be held at 11:00 a.m. on Tuesday, August 24, 2021, at the Evangelical Covenant Church in Dassel with Pastor... View Obituary & Service Information

The family of Anthony William Gasta created this Life Tributes page to make it easy to share your memories.

Send flowers to the Gasta family.