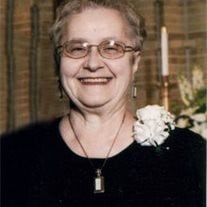 Alvina Bertha Bergquist, age 77, of Dassel, died Monday, November 3, 2014, at Augustana Lakeside Health Care Center in Dassel MN. A funeral service will be held on Friday, November 7, 2014, at 10:30 a.m. at Gethsemane Lutheran Church in Dassel with the Rev. Carolyn Pflipsen officiating. A private interment of the urn will be held later in the day. A time to gather with the family will be held on Thursday evening from 4:00 p.m. to 7:00 p.m. at the Johnson Funeral Home in Dassel and one hour prior to the service at the church on Friday morning. Alvina Bertha Bergquist, the daughter of Godfred and Bessie (Summerfield) Nelson, was born on January 2, 1937, in Ellsworth Township, Meeker County, Minnesota. She grew up in the Darwin area and graduated from Litchfield High School in 1955. She was united in marriage to Marlow Bergquist on July 20, 1956, at All Saints Lutheran Church in Darwin. Together they made their home in Dassel where they raised their three children. They celebrated their 58th year of marriage this summer. Alvina and Marlow owned and operated the Log Cabin in Dassel for several years. She was a Brownie and Girl Scout Troop Leader and a Cub Scout Den Mother. She was employed as a sales clerk at Arlys' Apparel in Cokato and Bretts Clothing Store in Hutchinson, as a Bank Teller at the Dassel State Bank and at the First National Bank of Cokato, where she eventually retired from. She enjoyed sewing, crafts, cross stitching, spending time in her garden and was blessed to spend time with many great grandchildren. She made the "Church Basement Ladies" aprons and spent many hours decorating the church basement for the changing seasons. She also enjoyed the holidays; decorating her home and preparing wonderful meals for her family as they gathered together. She is survived by her husband Marlow of Dassel, children Robin (Daniel) Johnson of Watkins, Charlene Danielson of Dassel, and Gary (Ann) Bergquist of Plymouth, eight grandchildren, Torrey Keith, Travis Keith, Dallas Danielson, Chad Johnson, Cassie Akerson, Ryan Johnson, Kyle Bergquist, and Leah Bergquist, eleven great grandchildren, and her sisters, Alfreda "Fritz" Simmons of Darwin, and Violet "Vi" (Roy) Johnson of Litchfield. She was preceded in death by her daughter, Gail, parents, brother, Roy Nelson, and her great granddaughter, Natalie Danielson, Alvina was a loving wife, mother, grandmother, great grandmother and friend and will be missed dearly.

The family of Alvina Bertha Bergquist created this Life Tributes page to make it easy to share your memories.

Send flowers to the Bergquist family.