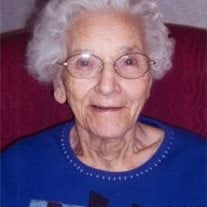 Alice Elvera Dahlman, age 95, of Dassel, died Monday, April 8, 2013, at Heritage Place in Cokato. A funeral service will be held on Saturday, April 13, 2013, at 2:00 p.m. at Stockholm Lutheran Church in rural Cokato, with Rev. Mark Little officiating. Interment will be held at the church cemetery following the service. A visitation will be held on Friday evening from 5:00 p.m. to 8:00 p.m. at the Johnson Funeral Home in Dassel and one hour prior to the service on Saturday at Stockholm Lutheran Church. Memorials are preferred to Stockholm Lutheran Church, Cokato, Minnesota or Beckville Lutheran Church, Litchfield, Minnesota. Alice Elvera (Beckstrand) Dahlman, the daughter of Andrew C. and Dinah E.V. (Nelson) Beckstrand, was born on May 2, 1917, in Cedar Mills Township, Meeker County, Minnesota. She grew up on the family farm and attended District 56 country school for her education. Later she attained her GED from the Dassel-Cokato High School when she was 60 years of age. Alice was baptized and confirmed at Beckville Lutheran Church and was presently a member of Stockholm Lutheran Church rural Cokato. She was an active member of her church and served however she could. Alice worked for many years at Fabri-Tek Manufacturing and Northland Canning Company in Cokato. She was a hard working woman who always had time for others. As a teenager she worked outside of her home doing housework and later moved to St. Paul where she was employed as a housekeeper for a minister's family. On June 3, 1944, Alice was united in marriage to Clifford Levine Dahlman at Beckville Lutheran Church in rural Litchfield. Together they made their home south of Dassel where they farmed until 1976. In the fall of 1976 they moved to the village of Dassel. Alice was a member of the Happy Hour and Homemakers Birthday Clubs, and a board member of Emmaus Home in Litchfield. Along with Clifford, Alice was a Meeker County Dairy Princess escort. She loved bird watching, ceramics, gardening, crocheting, knitting, sewing, and made many quilts for her children and grandchildren. She had entered handmade items in the local county fairs and the Minnesota State Fair, taking home numerous ribbons and awards. She loved her family dearly and always had time to take care of and serve others. Alice is survived by her children, Yvonne (Sherman) Danielson of Stillwater, Marie (Dennis) Persinger of Kenosha, WI, and Dwight (Jane) Dahlman of Dassel; seven grandchildren, Daren (Amie), Chelon, Nathan (Michele), and Aaron (Karol) Danielson, Melissa Dahlman (Paul) Babers, Alan (Jaclyn) Persinger, and Daniel Persinger; nine great-grandchildren Isaiah, Aaliyah, Evan, Caiden, Scarlett, and Holden Danielson, Svea and Maelyn Persinger, and Alec Gilbertson; one brother, Gordon (Jan) Beckstrand of Montrose, and numerous other relatives. Alice was preceded in death by her husband, Clifford, her parents, Andrew C. and Dinah (Nelson) Beckstrand, brothers, Wendell, Melvin, and Ben Beckstrand, sisters, Betty (Beckstrand) Mattson, Anna (Beckstrand) Marquardt, and Myrtle (Beckstrand) Zeppelin and two infant siblings.

The family of Alice Dahlman created this Life Tributes page to make it easy to share your memories.

Send flowers to the Dahlman family.