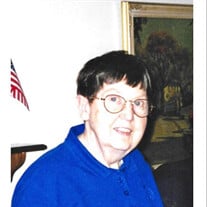 Aleda Joy Swanson, age 98, of Dassel, died Wednesday, May 27, 2020, at the Augustana Lakeside Health Care Center in Dassel. There will be a private graveside service at the Dassel Community Cemetery. The family request any memorials in Aleda’s memory to be sent to St. Croix Hospice at 2330 Troop Drive, Suite 102, Sartell, MN 56377, or the Augustana Lakeside Health Care Center at 439 William Ave E, Dassel, MN 55325. The Johnson Funeral Home in Dassel is in charge of the graveside services. Aleda Joy Swanson, the daughter of Herman and Ethel (Buzick) Swanson, was born on June 6, 1921, in Dassel, Minnesota. Aleda was baptized and later confirmed at the Evangelical Covenant Church in Dassel. She was an active member of the church. She grew up in Dassel where she attended Dassel High School and graduated in 1939. Aleda continued her education by attending the University of Minnesota where she received her Registered Nurses degree. Aleda served her country in the United States Navy as a nurse being stationed in San Diego, California during World War II. After the end of the war, Aleda returned to Minnesota where she was employed as a Public Health Nurse in Minneapolis until 1951. When the Korean Conflict began, Aleda served a tour as a navy nurse in Oakland, California from 1951 until 1953 and remained in the Naval Reserves until her retirement on March 1, 1969. After serving her country, Aleda moved back to Dassel where she was employed as a clinical nurse at the Dassel Clinic for Dr. Marvin Johnson and Dr. Joseph Houts. Aleda loved her family dearly, she often got together with them for Sunday Dinners and special events. She enjoyed needle work, cross stitching, shopping, and was an avid reader. She was an expert in crossword puzzles, often doing them in ink. She enjoyed traveling and had traveled to Japan with her cousin Marilyn. She enjoyed taking her nieces and nephews on adventures to many sites in the Minneapolis area. They had many fond memories that they will cherish and hold dear to their hearts. She is survived by her numerous nieces, nephews, and cousins. She was preceded in death by her parents, Herman and Ethel Swanson, siblings, Karl Emory Swanson, Margaret Isaacson, Betty Angel, and Herman Swanson Jr. and a niece, Mary Triden.

Aleda Joy Swanson, age 98, of Dassel, died Wednesday, May 27, 2020, at the Augustana Lakeside Health Care Center in Dassel. There will be a private graveside service at the Dassel Community Cemetery. The family request any memorials... View Obituary & Service Information

The family of Aleda Joy Swanson created this Life Tributes page to make it easy to share your memories.