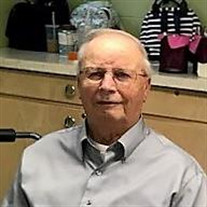 Alan Gail Skalberg, age 85, of Dassel, died Friday, August 30, 2019, at the Hennepin County Medical Center in Minneapolis. A memorial service will be held on Thursday, September 5, 2019, at 11:00 a.m. at the Dassel Church of Christ with Pastor Timothy Tomlinson officiating. There will be a one-hour time to gather with the family prior to the service on Thursday morning at the Dassel Church of Christ. The Johnson Funeral Home in Dassel is in charge of the funeral arrangements. Alan Gail Skalberg the son of Karl and Ruth (Oster) Skalberg was born on January 3, 1934, in Dassel, Minnesota. Alan was a lifelong member of the Dassel Church of Christ. Alan graduated from the Dassel High School. On June 10, 1952, Alan was united in marriage to Shirley Loch in Annandale, Minnesota. Together they made their home in the Dassel area where Alan worked with his father on the family farm. Together they raised their three children. Alan served his church and community by being on the church board for numerous years and was a member of the Dassel Co-op Creamery Board of Directors. Alan loved the farm, watching the crops grow and milking his cows. His family was dear to his heart and he enjoyed the many holidays that they celebrated together. He could often be found enjoying nature, watching the purple martins as he was swinging on the porch swing. He loved his animals and especially had a soft spot for his dog, “Old Snoopy”. He was an avid sports fan and enjoyed the Minnesota Twins, Vikings, and Minnesota Gophers football team. He also enjoyed spending time duck hunting, swimming, and waterskiing. Alan will be missed by his family and fondly remembered for being a loving father, grandfather, and husband. He is survived by his wife, Shirley Skalberg of Dassel, his children, Debra (Gene) Oberg of Dassel, Scott (Kathy) Skalberg of Dassel and Brad Skalberg of Cokato, eight grandchildren, 16 ½ great grandchildren, and two brothers, Kenneth Skalberg of Dassel, and Gary Skalberg of Chanhassen. He is also survived by numerous nieces, nephews and other relatives. He was preceded in death by his parents, brothers, Robert Skalberg, and Ronald Skalberg, and a sister, Jeanette Tomlinson.

Alan Gail Skalberg, age 85, of Dassel, died Friday, August 30, 2019, at the Hennepin County Medical Center in Minneapolis. A memorial service will be held on Thursday, September 5, 2019, at 11:00 a.m. at the Dassel Church of Christ with Pastor... View Obituary & Service Information

The family of Alan Gail Skalberg created this Life Tributes page to make it easy to share your memories.

Send flowers to the Skalberg family.